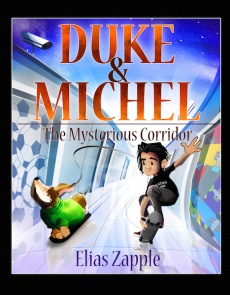 Follow the adventures of skateboarder Michel as his cousin goes missing and he meets up with a greedy, sarcastic, narcissistic, talking Basset Hound. Together they go on a mission to find Michel's cousin and do battle with the evil Master.

A bizarre fantasy story set in an alternate-reality all linked together by a mysteriuos corridor. Each door in the corridor takes you to an even more bizarre world such as Skaters' Paradise, Candyland, Napland and Planet Football. You'll laugh until your guts explode. Get it now before Duke insults you.

Duke to Michel: Even though I'm fairly certain you'd struggle in a quiz against a pigeon, you are capable enough of opening doors.

The first in the Duke & Michel series. The 2nd and 3rd books are now out!