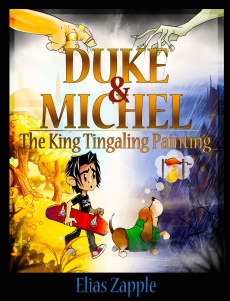 The incredible sequel to Duke & Michel: The Mysterious Corridor is here and things get a lot worse for Michel.

Having returned home after his adventures in that strange universe, Michel has to return. He reunites with Duke, the talking, greedy, sarcastic, food-obsessed, narcissistic, lazy, arrogant Basset Hound. Michel's super happy to have to get Duke to join him again.

Unfortunately, they become pawns in an evil game between the Master and King Tingaling, who's still royally riled about a painting depicting him in a compromising position with his favourite pig, Buttercup.

Will Michel and Duke survive? Will Duke & Michel find out what's happened to Michel's family? Read it to find out.

Read Duke & Michel: The King Tingaling Painting already? Don't worry, the sequel, the third Duke & Michel book, is already out! Duke & Michel: Return of the Nibbles is out now and things get even worse. Will light ever shine again in Michel's world? More hilarity and adventure awaits!