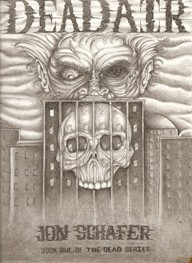 Dead Air is not your typical zombie apocalypse novel.
While most zombie books don't explain where the dead come from, Dead Air starts out by giving a realistic explanation of how they evolved. It then follows how the highly communicable disease they carry spreads rapidly across the United States, and then the world.
It features Steve Wendell, a manager of a radio station in Clearwater, Florida, who after reading a news story of a man attacking and biting hospital staff in in little Rock, Arkansas, gets an idea for an upcoming live show on Halloween. Little does he realize that the report is only the first of what will become a flood of people being infected, dying, and rising up to attack, kill, and eat their friends, neighbors, and relatives.
Then these people get up to do the same.
Taking refuge with 8 other people in the 15 story building that houses the radio station he manages, Steve and his fellow survivors barricade themselves and continue to broadcast live as the dead surround them and search for a way in.