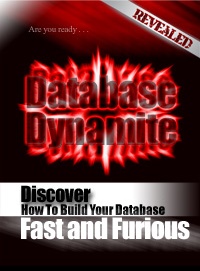 Learn How To Build Your Database Fast And Furious

The key to a successful online business is a large targeted database. Building a database is not a difficult process and you're about to learn just how easy and profitable it can be.

Terry:
Welcome to the list building training session.  Today we're going to hear from Ian Herculson, who is the guy that owns and runs TheGuruMarketer.com, and he's a master list builder.  Ian is going to share with us his expertise and show us exactly how to build your own, targeted, opt-in list.  I'm going to be your host for this session, and my name is Terry Telford, from TheBusinessProfessional.com.  I want to start out by saying thank you very much for being here today with us, Ian.


Ian:
Thank you for having me.

Terry:
Thank you.  Let's take a look at you from a personal aspect first.  What's your background?

Ian:
In Internet marketing, my background is that I really just stumbled into it when I was about 20 years old.  I bought my first computer and I was going to university at the time.  When I started getting on the Internet, I realized that probably a lot of people were going to make money from it.  I did a search on one of the search engines for "make money" and so many links came up that I was pretty much involved in it right away.  It took about three or four years until I made any income.  It's been a pretty long road.

Terry:
Right.  What happened in the four years there that it took you to make money?  What kind of steps happened for you?

Ian:
Mostly it's just conquering the big learning curve.  A lot of people know that when they first get on the Internet, there's a ton of information and everybody knows that when you search for one thing you end up finding something completely different.  Conquering that learning curve was probably the hardest thing I had to do.  Also, staying focused on what it was that I wanted to do.

I started out by joining pay per click programs where I advertised other people's banners on my website, and every time someone clicked on the banner I'd make a penny or three pennies or whatever.  My grand idea was that I was going to get a website that had a million visitors a day and all those pennies would add up and make me rich.  In reality, the biggest check I ever got was just over a dollar and it was probably from me clicking on my own banners, so it didn't work out.

I moved on to selling virtual hosting for a company.  That was a steep learning curve as well.  I just slowly started learning about the process of selling on the Internet and advertising and getting my name out there and even more advanced strategies like tracking my ads and stuff like that.  It really took a long, long time.  After about two years of not really making money, I had learned basic principles, and I wrote out my own guide of the basics on how to start and Internet marketing business.  I sold it for myself for $19.95.  That was my first big success, because I sold about 1,000 copies over a year.  That's how I started Guru Marketers; I started the newsletter when I started that ebook.  It's just been a lot better.  Since I learned how to sell my own stuff, it made selling other people's stuff a lot easier.