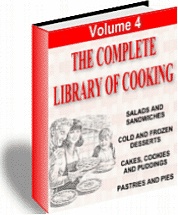 This volume, the fourth in The Complete Library Of Cooking, deals with salads, sandwiches, cold desserts, cakes, both large and small, puddings, pastry, and pies. Such foods constitute some of the niceties of the diet, but skill in their preparation signifies at once a cooks mastery of the science of cooking.

In Salads and Sandwiches are presented so simply the secrets of appetizing salads that they can be grasped by even a novice, and sandwiches of numerous varieties, from those appropriate for afternoon teas to those suitable for the main dish in the meal, are so treated that they appear to rise above the ordinary place usually accorded them. You will never need to hesitate to prepare a menu for an afternoon or evening social affair or the salad course in a luncheon or dinner after a study of this part of the volume. A glance through Cold and Frozen Desserts will convince you very quickly that a large number of the desserts that complete our meals are served cold. The mere mention of custards, gelatine desserts, and such frozen mixtures as ice creams, ices, frappes, sherbets, mousses, parfaits, and biscuits, all of which are explained here, is sufficient to indicate that this is an extremely delightful part of the subject of cooking. Entertaining takes on a new and simplified meaning when you know how to make and serve such dishes. To be able to make cakes and puddings well is one of the ambitions of the modern cook, and you have an opportunity to realize it in a study of Cakes, Cookies, and Puddings, Parts 1 and 2. Sweet food in excess is undesirable, but in a moderate quantity it is required in each person's diet and may be obtained in this form without harm if it is properly prepared. The two classes of cakes--butter and sponge--are treated in detail both as to the methods of making and the required ingredients, and numerous recipes are given which will enable you to provide both plain and fancy cakes for ordinary and special occasions. Puddings that are prepared by boiling, steaming, and baking, and the sauces that make them appetizing, receive a goodly share of attention. Pastries and Pies completes this volume, rounding out, as it were, the cooks understanding of dessert making. To many persons, pastry making is an intricate matter, but with the principles thoroughly explained and each step clearly illustrated, delicious pies of every variety, as well as puff-paste dainties, may be had with very little effort.