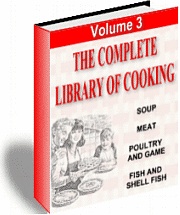 This volume, which is the third of The Complete Library Of Cooking includes soups and the high-protein foods, meat, poultry, game, and fish. It therefore contains information that is of interest to every cook, for these foods occupy an important place in the majority of meals.

In your study of Soup, you will come to a thorough appreciation of the place that soup occupies in the meal, its chief purposes, and its economic value. All the different kinds of soups are classified and discussed, recipes for making them, as well as the stocks used in their preparation, receive the necessary attention. The correct serving of soup is not overlooked; nor are the accompaniments and garnishes so often required to make the soup course of the meal an attractive one. In Meat, Parts 1 and 2, are described the various cuts of the different kinds of meat--beef, veal, lamb, mutton, and pork--and the part of the animal from which they are obtained, the way in which to judge a good piece of meat by its appearance, and what to do with it from the time it is purchased until all of it is used. All the methods applicable to the cooking of meats are emphasized in this section. Equipped with this knowledge, you will need to give no concern to the selection, care, and cooking of every variety of meat. In Poultry and Game, the selection and preparation of all kinds of poultry receive attention. While such food is somewhat of a luxury in many homes, it helps to relieve the monotony of the usual protein foods, and it often supplies just what is desired for special occasions. Familiarity with poultry and game is a decided asset to any cook, and success with their cooking and serving is assured through a study of this text, for every step in their preparation is clearly explained. In Fish and Shell Fish, the other high-protein food is treated in full as to its composition, food value, purchase, care, and preparation. Such interesting processes as the boning, skinning, and filleting of fish are carefully explained. In addition to recipes for fresh, salt, smoked, and canned fish are given directions for the preparation of all edible shell fish and recipes for the various stuffings and sauces served with fish. Too much cannot be said about the importanceof the subjects covered in this volume and the necessity for a thorough understanding of them on the part of every cook. Indeed, a mastery of them will mean for you an acquaintance with the main part of the meal, and when you know how to prepare these foods, the other dishes will prove a simple matter.