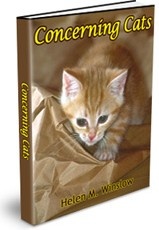 CHAPTER I. CONCERNING THE "PRETTY LADY"

She was such a Pretty Lady, and gentle withal; so quiet and eminently ladylike in her behavior, and yet dignified and haughtily reserved as a duchess. Still it is better, under certain circumstances, to be a cat than to be a duchess. And no duchess of the realm ever had more faithful retainers or half so abject subjects.

Do not tell me that cats never love people; that only places have real hold upon their affections. The Pretty Lady was contented wherever I, her most humble slave, went with her. She migrated with me from boarding−house to sea−shore cottage; then to regular housekeeping; up to the mountains for a summer, and back home, a long day's journey on the railway; and her attitude was always "Wheresoever thou goest I will go, and thy people shall be my people."

I have known, and loved, and studied many cats, but my knowledge of her alone would convince me that cats love people-in their dignified, reserved way, and when they feel that their love is not wasted; that they reason, and that they seldom act from impulse.

I do not remember that I was born with an inordinate fondness for cats; or that I cried for them as an infant. I do not know, even, that my childhood was marked by an overweening pride in them; this, perhaps, was because my cruel parents established a decree, rigid and unbending as the laws of the Medes and Persians, that we must never have more than one cat at a time. Although this very law may argue that predilection, at an early age, for harboring everything feline which came in my way, which has since become at once a source of comfort and distraction.

After a succession of feline dynasties, the kings and queens of which were handsome, ugly, sleek, forlorn, black, white, deaf, spotted, and otherwise marked, I remember fastening my affections securely upon one kitten who grew up to be the ugliest, gauntest, and dingiest specimen I ever have seen. In the days of his kittenhood I christened him "Tassie" after his mother; but as time sped on, and the name hardly comported with masculine dignity, this was changed to Tacitus, as more befitting his sex. He had a habit of dodging in and out of the front door, which was heavy, and which sometimes swung together before he was well out of it.

As a consequence, a caudal appendage with two broken joints was one of his distinguishing features. Besides a broken tail, he had ears which bore the marks of many a hard−fought battle, and an expression which for general "lone and lorn"−ness would have discouraged even Mrs. Gummidge. But I loved him, and judging from the disconsolate and long−continued wailing with which he rilled the house whenever I was away, my affection was not unrequited.

But my real thraldom did not begin until I took the Pretty Lady's mother. We had not been a week in our first house before a handsomely striped tabby, with eyes like beautiful emeralds, who had been the pet and pride of the next−door neighbor for five years, came over and domiciled herself. In due course of time she proudly presented us with five kittens. Educated in the belief that one cat was all that was compatible with respectability, I had four immediately disposed of, keeping the prettiest one, which grew up into the beautiful, fascinating, and seductive maltese "Pretty Lady," with white trimmings to her coat. The mother of Pretty Lady used to catch two mice at a time, and bringing them in together, lay one at my feet and say as plainly as cat language can say, "There, you eat that one, and I'll eat this," and then seem much surprised and disgusted that I had not devoured mine when she had finished her meal.