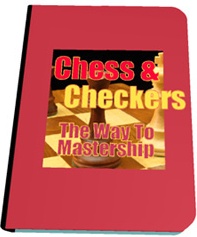 Now you can become a Master Chess and Checkers Player!


It was written by a Championship Winner; Edward Lasker from the early 1900's! It has complete instructions for the beginner and valuable suggestions for the advanced player as well!

Chess serves a good purpose for young and old. The child will find it a fascinating pastime and, unconsciously sharpening his mind in playing the game, will acquire a fine preparation for his calling in life, no matter what it may be. For the man, and the woman too, Chess is well worth learning, as it will prove the best companion in hours of leisure.

The thinking process, which is developed by playing Chess is useful wherever logical thinking and concentration are needed, and it cannot be denied that these qualities are most desirable in the every day struggle in which mental work has so largely superseded manual labor.

The thoughtful playing of the game not only cultivates the logical quality and imaginative power of the mind but also tends to develop strength of character. It teaches us not to be hasty in our decisions, but to exercise foresight at all times as we must abide by all consequences of our actions.

The reason why many people hesitate to learn the game and to teach it to their children is that Chess has been misrepresented as a game which is very difficult to master. This false impression has been created mainly by the wrong methods of teaching usually employed.

The majority of writers on Chess deal with a maze of variations and they expect the reader to memorize the moves with which to parry the maneuvers of the opponent, instead of simply developing a few common sense principles which are easy to grasp and perfectly sufficient to make a good player of any one.

The really great advantage of the game of Chess over any other board game, is that it lends itself to the application of general principles, so that anyone can grasp and enjoy it without memorizing more than the rules according to which the men move.

In explaining the game of Checkers, to which the second part of the book is devoted, he has also tried to develop general principles of strategy, rather than to offer a mere classification of analyzed lines of play, which the reader would have to memorize in order to be able to compete with experts.!

This ebook contains the 118 chess and checkers board game diagrams appearing in the original book, plus an extra chess diagram that appeared on the front cover of the original book, all in the form of ASCII line drawings. Edward goes into great detail explaining each move and the strategies involved in using them. The book is 178 pages, and below is a sample of the Table of Contents.

If you've been thinking about learning how to play Chess and/or Checkers, or if you know someone else who's been wanting to learn, now is the time to take action!