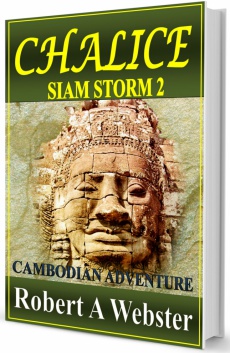 Professor Norman Rumble has spent the last few years in his dark, lonely world. Life for the old professor has just been a mundane routine since his beloved wife passed away, he just dedicated himself to his research. However, thanks to his tireless work he now has a chance to get his life back. He just needs to find some way to test his theory.

In Chalice, the hilarious sequel to the Siam Storm Adventure; our hapless heroes go to Cambodia to once again recover the sacred Buddha relic.

This time they must thwart plans that could change the human race and turn Spock and Stu into fruit based drinkers.

The chase takes them from the warm sandy beaches of Sihanoukville, on the southern coast of Cambodia, to Siem Reap and the spectacular Angkor Wat temples. They encounter many obstacles along the way and face many calamity's, such as warm beer. Our team has to find an underground citadel, recover the holy box, elude some unsavoury characters, spend time chillaxing on the beach and find some decent bars in Cambodia...will they succeed?


Reader Reviews for "A Cambodian Adventure"
Reviewed by Robert A Webster on 2015-05-29
My Rate 5
Chalice is a dramatic and hilarious sequel to the Siam Storm adventure. . . highly recommended


Reader Reviews for "A Cambodian Adventure"
Reviewed by Robert A Webster on 2015-05-29
My Rate 5
Chalice is a dramatic and hilarious sequel to the Siam Storm adventure. . . highly recommended