A room without books is like a body without a soul.
Marcus Tullius Cicero
Advanced search

Caring For Your Hamster
Category: Animals 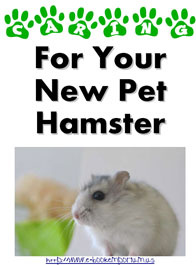 Considering A Hamster As A Pet

The care of the dwarf hamsters is similar to that of the golden hamster, but there are differences in feeding and housing needs and temperament. Winter whites and Campell's are fairly popular, in the US the campells more so than the whinter whites, while it's other way round in Europe.

Roborovski and Chinese striped Hamsters are somewhat more difficult to breed and keep, they are usually only available from breeders, and therefore limited to serious rodentia fans.