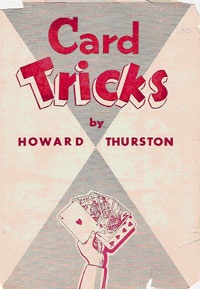 A Few Incidents in the Life of Howard Thurston.

HOWARD THURSTON, the Premier Card Manipulator of the World, and known throughout America as "The Man who Mystified Hermann," was born at Columbus, Ohio, on the l0th of July, 1869, and is therefore now in his thirty-first year.

Originally intended by his father-a gentleman of firm Christian principles-for the ministry, he entered the D. L. Moody College, in Northfield, Mass., and completed a course of five years' training. During this period he came to the conclusion that Providence had never intended him to go through life as a parson, and his natural love of Magic always predominated over his liking for the more serious subject he was studying.

Upon graduating with honors from the College, very much against his father's wish he decided to adopt Magic as his profession. (How many other well-meaning enthusiasts have adopted this procedure, and with what result?) He did so, but found that there were already too many "all-round" Conjurers in the business. This some-

what damped his ardor at first; but, after cogitating for some considerable time, he decided to adopt a single branch of the Magician's Art, viz., Card Tricks.

Then came many weary months of assiduous practice, the greater part of the time being occupied in a strict adherence to a special system of strengthening and giving additional flexibility to the muscles of the hands (a system which, much as I should like, I am not in a position to divulge), and after five years' traveling in America, presenting a Magical Entertainment of two hours in length in the smaller cities, Mr. Thurston first made his bow to a public audience as a Card Manipulator at the Fountain Square Theatre, Cincinnati, Ohio, in January, 1895. Since then his career has been one of unprecedented success and brilliancy.

One of the chief characteristics of Mr. Thurston's act is his graceful stage deportment. No other living artiste, in my opinion (and I have witnessed the performances of the best Prestidigitateurs of the past quarter of a century) can compare with him in the incomparable manner in which he presents his tricks.

There is nothing automatic about this Past Master of the Art. During the whole of his performance he is thinking, and always on the alert, watching for new ideas to occur to his energetic brain. Magic, like Literature is a double Art: Mechanical Magic is the Prose, while Sleight-of-

Hand is the Poetry, and it is in this latter branch that this great artiste excels.

Mr. Thurton's pièce de resistance is his celebrated Rising-Card Trick, with which he absolutely mystified that guardian of an honored name in the world of deception-HERMANN THE GREAT.

With regard to this trick I think it will be of interest to the readers of this ebook, to reproduce at this point the following extract from the Denver Sunday Post, of October 23d, 1898: