As for me, all I know is that I know nothing.
Socrates
Advanced search 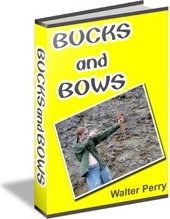 FOR information and courtesies received which have been invaluable in the composition of this work, the author is indebted to the following:

Dr. J. K. Doutt, Curator of Mammals, Carnegie Museum of Pittsburgh, Pennsylvania; Professor Edwin L. Peterson of the University of Pittsburgh; Thomas D. Frye, Formerly Executive Director of the Pennsylvania State Game Commis- sion; Jim Ramsey; Roy I. Case; Edward B. Hagy, Jr.; and the Game Commissions of all the states mentioned in the chapter on "Hunting Laws." To all of them the author conveys his thanks and appreciation.


"So long as the new moon returns in heaven a beautiful bent bow, so long will archery keep hold of the hearts of men." - MAURICE THOMPSON.

WOULD that through some medium we could call in the ghost of Robin Hood; no doubt it could and would reveal the secrets of successful hunting with the good bow and shaft. But, be that as it may, we must rely on our own devices to ferret out these secrets as best we can.

It must not be assumed that the bow is as efficient as the rifle. It is not. It has not the power, the range or the accuracy. The hunter who chooses the bow is taking a handicap of 20 to 1. It follows, therefore, that the archer is either crazy or the king of all optimists, or so say the non-archers.

The toxopohilite, however, takes an entirely different view. In most cases the would-be bow hunter has hunted for many years with firearms. He has reached a point where his sporting conscience tells him that he has taken his share of this noble animal. He has become conscious of the fact that fish and game cannot vote; he has, for sometime past, concluded that it is time for him to do something about conservation. But, when he reflects on the 20 to 1 handicap the archer must take, conscience appears to issue a parole. He knows that bow hunt- ers will never be able to reduce the herd even though the season be open to both sexes. He knows there will be very few if any permanent cripples.

After reviewing these facts, he feels the urge to sally forth with a full quiver of arrows and a dependable bow to see what the red gods have in store for him. Success or not, he will be out with nature and will enjoy a full cup of pleasure.

Few people seem to realize the important part the bow has played in man's advance toward civilization. It has been said that the three most important incidents in man's early de- velopment were the discovery and application of fire and the inventions of the wheel and the bow. Without fire man could not have advanced to a position much above the ape, without the wheel man could not have progressed and without the bow he may not have survived. The bow is the instrument that marked the time when man really gained "Dominion over every living thing that moveth upon the earth."*