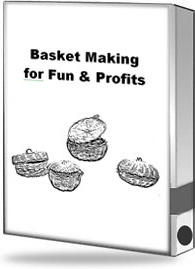 THE twisting and weaving of Nature's materials, grasses, twigs, rushes and vines, into useful and beautiful forms seems almost instinctive in man. Perhaps it came to him as the nest-weaving instinct comes to birds-for at first he used it as they do, in the building of his house. Later, shields and boats were formed of wicker work, but how long ago the first basket was made no one is wise enough to tell us. To-day Indian tribes in South America weave baskets from their native palms, South African negroes use reeds and roots, while the Chinese and Japanese are wonderful workmen in this as in other arts and industries; but basketry has come down to us more directly through the American Indian. Generations of these weavers have produced masterpieces, many of which are preserved in our museums, and the young basket maker need not go on long pilgrimages to study the old masters of his craft. Here at last, as in England, the value of guide training is being realized, and basketry is taking an important place; following the kindergarten and enabling the child to apply the principles he has learned there. He still works from the center out, and weaves as he wove his paper mats, but permanent materials have replaced the perishable ones, and what he makes has an actual value.

Basketry also fills the need for a practical home industry for children; so not only in school, club and settlement, but on home piazzas in summer young weavers are taking their first lessons. Though they are unlearned in woodcraft, and have not the magic of the Indian squaw in their fingertips, they can, and do, feel the fascination of basketry in the use of rattan, rush and raffia. It is hoped that this ebook may be a help in teaching them "Basket Making for Fun & Profits."