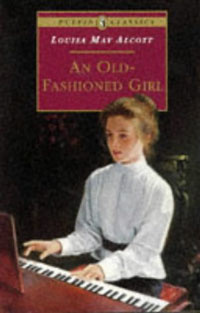 AS a preface is the only place where an author can with propriety explain a purpose or apologize for shortcomings, I venture to avail myself of the privilege to make a statement for the benefit of my readers.

As the first part of "An Old-Fashioned Girl" was written in 1869, the demand for a sequel, in beseeching little letters that made refusal impossible, rendered it necessary to carry my heroine boldly forward some six or seven years into the future. The domestic nature of the story makes this audacious proceeding possible; while the lively fancies of my young readers will supply all deficiencies, and overlook all discrepancies.

This explanation will, I trust, relieve those well-regulated minds, who cannot conceive of such literary lawlessness, from the bewilderment which they suffered when the same experiment was tried in a former ebook.

The "Old-Fashioned Girl" is not intended as a perfect model, but as a possible improvement upon [Page] the Girl of the Period, who seems sorrowfully ignorant or ashamed of the good old fashions which make woman truly beautiful and honored, and, through her, render home what it should be,-a happy place, where parents and children, brothers and sisters, discover to love and know and help one another.

If the history of Polly's girlish experiences suggests a hint or insinuates a lesson, I shall feel that, in spite of many obstacles, I have not entirely neglected my duty toward the little men and women, for whom it is an honor and a pleasure to write, since in them I have always found my kindest patrons, gentlest critics, warmest friends.

"Oh, I 'm not going; it 's too wet. Should n't have a crimp left if I went out such a day as this; and I want to look nice when Polly comes."

"You don't expect me to go and bring home a strange girl alone, do you?" And Tom looked as much alarmed as if his sister had proposed to him to escort the wild woman of Australia.

"Well, I call that mean! I supposed I 'd got to go; but you said you 'd go, too. Catch me bothering about your friends another time! No, sir! " And Tom rose from the sofa with an air of indignant resolution, the impressive effect of which was somewhat damaged by a tousled head, and the hunched appearance of his garments generally.

"Now, don't be cross; and I 'll get mamma to let you have that horrid Ned Miller, that you are so fond of, come and make you a visit after Polly 's gone," said Fanny, hoping to soothe his ruffled feelings.

"How long is she going to stay?" demanded Tom, making his toilet by a promiscuous shake.

"She won't stay long then, if I can help it," muttered Tom, who regarded girls as a very unnecessary portion of creation. Boys of fourteen are apt to think so, and perhaps it is a wise arrangement; for, being fond of turning somersaults, they have an opportunity of indulging in a good one, metaphorically speaking, when, three or four years later, they become the abject slaves of "those bothering girls."

"Look here! how am I going to know the creature? I never saw her, and she never saw me. You 'll have to come too, Fan," he added, pausing on his way to the door, arrested by the awful idea that he might have to address several strange girls before he got the right one.

"You 'll find her easy enough; she 'll probably be standing round looking for us. I dare say she 'll know you, though I 'm not there, because I 've described you to her."

"Guess she won't, then;" and Tom gave a hasty smooth to his curly pate and a glance at the mirror, feeling sure that his sister had n't done him justice. Sisters never do, as "we fellows" know too well.

"Do go along, or you 'll be too late; and then, what will Polly think of me?" cried Fanny, with the impatient poke which is peculiarly aggravating to masculine dignity.

"She 'll think you cared more about your frizzles than your friends, and she 'll be about right, too."

Feeling that he said rather a neat and cutting thing, Tom sauntered leisurely away, perfectly conscious that it was late, but bent on not being hurried while in sight, though he ran himself off his legs to make up for it afterward.

"If I was the President, I 'd make a law to shut up all boys till they were grown; for they certainly are the most provoking toads in the world," said Fanny, as she watched the slouchy figure of her brother strolling down the street. She might have changed her mind, however, if she had followed him, for as soon as he turned the corner, his whole aspect altered; his hands came out of his pockets, he stopped whistling, buttoned his jacket, gave his cap a pull, and went off at a great pace.

The train was just in when he reached the station, panting like a race-horse, and as red as a lobster with the wind and the run.

"Suppose she 'll wear a top-knot and a thingumbob, like every one else; and however shall I know her? Too bad of Fan to make me come alone!" thought Tom, as he stood watching the crowd stream through the depot, and feeling rather daunted at the array of young ladies who passed. As none of them seemed looking for any one, he did not accost them, but eyed each new batch with the air of a martyr. "That 's her," he said to himself, as he presently caught sight of a girl in gorgeous array, standing with her hands folded, and a very small hat perched on the top of a very large "chig-non," as Tom pronounced it. "I suppose I 've got to speak to her, so here goes;" and, nerving himself to the task, Tom slowly approached the damsel, who looked as if the wind had blown her clothes into rags, such a flapping of sashes, scallops, ruffles, curls, and feathers was there.

"I say, if you please, is your name Polly Milton?" meekly asked Tom, pausing before the breezy stranger.

"No, it is n't," answered the young lady, with a cool stare that utterly quenched him.

"Where in thunder is she?" growled Tom, walking off in high dudgeon. The quick tap of feet behind him made him turn in time to see a fresh-faced little girl running down the long station, and looking as if she rather liked it. As she smiled, and waved her bag at him, he stopped and waited for her, saying to himself, "Hullo! I wonder if that 's Polly?"

Up came the little girl, with her hand out, and a half-shy, half-merry look in her blue eyes, as she said, inquiringly, "This is Tom, is n't it?"

"Yes. How did you know?" and Tom got over the ordeal of hand-shaking without thinking of it, he was so surprised.

"Oh, Fan told me you 'd got curly hair, and a funny nose, and kept whistling, and wore a gray cap pulled over your eyes; so I knew you directly." And Polly nodded at him in the most friendly manner, having politely refrained from calling the hair "red," the nose "a pug," and the cap "old," all of which facts Fanny had carefully impressed upon her memory.

"Where are your trunks?" asked Tom, as he was reminded of his duty by her handing him the bag, which he had not offered to take.

"Father told me not to wait for any one, else I 'd lose my chance of a hack; so I gave my check to a man, and there he is with my trunk;" and Polly walked off after her one modest piece of baggage, followed by Tom, who felt a trifle depressed by his own remissness in polite attentions. "She is n't a bit of a young lady, thank goodness! Fan did n't tell me she was pretty. Don't look like city girls, nor act like 'em, neither," he thought, trudging in the rear, and eyeing with favor the brown curls bobbing along in front.

As the carriage drove off, Polly gave a little bounce on the springy seat, and laughed like a delighted child. "I do like to ride in these nice hacks, and see all the fine things, and have a good time, don't you?" she said, composing herself the next minute, as if it suddenly occurred to her that she was going a-visiting.

"Not much," said Tom, not minding what he said, for the fact that he was shut up with the strange girl suddenly oppressed his soul.

"How 's Fan? Why did n't she come, too?" asked Polly, trying to look demure, while her eyes danced in spite of her.

"Afraid of spoiling her crinkles;" and Tom smiled, for this base betrayal of confidence made him feel his own man again.