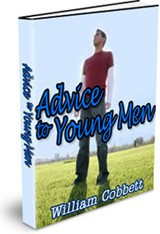 And (Incidentally) to Young Women, in the Middle and Higher Ranks of Life. In a Series of Letters, Addressed to a Youth, a Bachelor, a Lover, a Husband, a Father, a Citizen, or a Subject.

1. It is the duty, and ought to be the pleasure, of age and experience to warn and instruct youth and to come to the aid of inexperience. When sailors have discovered rocks or breakers, and have had the good luck to escape with life from amidst them, they, unless they be pirates or barbarians as well as sailors, point out the spots for the placing of buoys and of lights, in order that others may not be exposed to the danger which they have so narrowly escaped. What man of common humanity, having, by good luck, missed being engulfed in a quagmire or quicksand, will withhold from his neighbours a knowledge of the peril without which the dangerous spots are not to be approached?

2. The great effect which correct opinions and sound principles, imbibed in early life, together with the good conduct, at that age, which must naturally result from such opinions and principles; the great effect which these have on the whole course of our lives is, and must be, well known to every man of common observation. How many of us, arrived at only forty years, have to repent; nay, which of us has not to repent, or has not had to repent, that he did not, at an earlier age, possess a great stock of knowledge of that kind which has an immediate effect on our personal ease and happiness; that kind of knowledge, upon which the cheerfulness and the harmony of our homes depend!

3. It is to communicate a stock of this sort of knowledge, in particular, that this work is intended; knowledge, indeed, relative to education, to many sciences, to trade, agriculture, horticulture, law, government, and religion; knowledge relating, incidentally, to all these; but, the main object is to furnish that sort of knowledge to the young which but few men acquire until they be old, when it comes too late to be useful.

4. To communicate to others the knowledge that I possess has always been my taste and my delight; and few, who know anything of my progress through life, will be disposed to question my fitness for the task. Talk of rocks and breakers and quagmires and quicksands, who has ever escaped from amidst so many as I have! Thrown (by my own will, indeed) on the wide world at a very early age, not more than eleven or twelve years, without money to support, without friends to advise, and without book-learning to assist me; passing a few years dependent solely on my own labour for my subsistence; then becoming a common soldier and leading a military life, chiefly in foreign parts, for eight years; quitting that life after really, for me, high promotion, and with, for me, a large sum of money; marrying at an early age, going at once to France to acquire the French language, thence to America; passing eight years there, becoming bookseller and author, and taking a prominent part in all the important discussions of the interesting period from 1793 to 1799, during which there was, in that country, a continued struggle carried on between the English and the French parties; conducting myself, in the ever-active part which I took in that struggle, in such a way as to call forth marks of unequivocal approbation from the government at home; returning to England in 1800, resuming my labours here, suffering, during these twenty-nine years, two years of imprisonment, heavy fines, three years self-banishment to the other side of the Atlantic, and a total breaking of fortune, so as to be left without a bed to lie on, and, during these twenty-nine years of troubles and of punishments, writing and publishing, every week of my life, whether in exile or not, eleven weeks only excepted, a periodical paper, containing more or less of matter worthy of public attention; writing and publishing, during the same twenty-nine years, a grammar of the French and another of the English language, a work on the Economy of the Cottage, a work on Forest Trees and Woodlands, a work on Gardening, an account of America, a ebook of Sermons, a work on the Corn-plant, a History of the Protestant Reformation; all ebooks of great and continued sale, and the last unquestionably the ebook of greatest circulation in the whole world, the Bible only excepted; having, during these same twenty-nine years of troubles and embarrassments without number, introduced into England the manufacture of Straw-plat; also several valuable trees; having introduced, during the same twenty-nine years, the cultivation of the Corn-plant, so manifestly valuable as a source of food; having, during the same period, always (whether in exile or not) sustained a shop of some size, in London; having, during the whole of the same period, never employed less, on an average, than ten persons, in some capacity or other, exclusive of printers, bookbinders, and others, connected with papers and ebooks; and having, during these twenty-nine years of troubles, embarrassments, prisons, fines, and banishments, bred up a family of seven children to man's and woman's state.