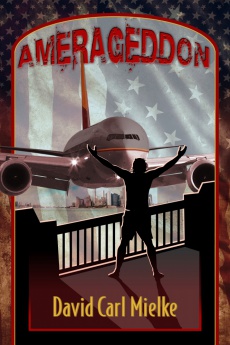 AMERICA IS UNDER ATTACK! Over a three day period, coordinated bombings have destroyed six American iconic landmarks, killing and injuring thousands, staggering the economy and triggering riots in cities across the nation. One of the targets is the world's largest cruise ship that is destroyed by a hijacked airliner. Former FBI agent SHARON RICHARDS is on board with her husband and twin sons. Sharon's family is killed but she miraculously survives and vows to avenge their murders. Lacking adequate proof and restricted by constitutional law, the government seems helpless to prevent further bombings. In a strange quirk of fate, Sharon is recruited by the President of the United States to penetrate a suspected mosque housing a home-grown terrorist cell and gather evidence. But time is running out before the next round of devastating explosions. Sharon must act outside the law to save the country from unbridled anarchy and total economic collapse. If she fails, it could be the END OF AMERICA!

Author's Note: AMERAGEDDON is a story that could be eerily prophetic. According to a recent national poll, over 70% of Americans think that an incident like 9-11 or worse will occur within the next two years. The question is: ARE WE READY?