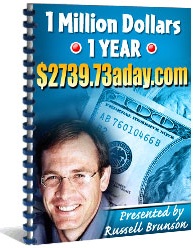 +$5
Title: 1 Million Dollars In 1 Year
Author: Russell Brunson
Description:
How To Make $1,000,000 THIS YEAR With Your Online Business

At Yale University in the 1950's, there was a study done with a group of recent graduates. They were asked if they had set goals for their future, and if they had written them down.

Of these graduates, only 3% had written specific goals.

They did a follow up years later with these students and found something very interesting. The researches discovered the those 3% who had written specific goals not only achieved most of the goals they set, but their net worth was more than the other 97% of their class combined!

Are You Planning On Failing?

There's an old saying "If you fail to plan you plan to fail." Writing out the things that you want to achieve and setting your sights high can have a major impact on your level of future success. If we don't set very high standards for yourself, it is easy to become complacent because we aren't stretching ourselves.

With that said, I set a very large goal for my own personal business this year. It is to generate $1,000,000 in sales in 2005. If you do some simple math you would find that to reach this goal a person would have to generate exactly $2739.73 a day for a whole year.

I am committed to achieving this goal, and I want to help my subscribers and friends achieve their sales goals this year as well.

On Thursday December 30th 2004, during our closed door mastermind group we brainstormed and discussed the strategies necessary to reach the $2739.73 a day goal.

60 Minutes Turned Into A Powerful 3 Hours!

An expected 60 minute brainstorming session turned into 3 hours of the most powerful information that I have ever heard on a teleconference! Whether your sales goals are to make $100 a month, or 100,000 a month, this information will help you to achieve those goals.

But before you start to listen in on our private mastermind session, I wanted to introduce you to those who were involved in the training that happened during this phone call.

Jeremy Burns created one of the most powerful viral marketing models ever and earned hundreds of thousands of dollars giving away a free product!

Mike Filsaime generates hundreds of thousands of visitors to his sites using the power of viral marketing. There are few if any people who have a better understanding and ability to implement viral marketing then Mike.

Josh Anderson is on the cutting edge of new multimedia software development. 2005 will be a major year for his innovations.

I want to emphasize that this interview will not be offered at this discount forever. It is very time sensitive, and valuable to you. Grab a pen and some paper, and click the play button and start taking notes. This year you could reach sales goals that you didn't even think were possible before now.